Nestlé Continues Commitment To The Environment with The Planting of More Than 100,000 Trees 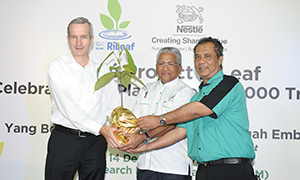 On 14th December 2012, Nestlé Malaysia celebrated its achievement of planting more than 100,000 trees along the Kinabatangan River in Sabah through Nestlé Project RiLeaf. The event was held at Forest Research Institute Malaysia (FRIM) and was officiated by Yang Berbahagia Datuk Zoal Azha bin Yusof, the Secretary General of Ministry of Natural Resources and Environment. The planting of over 100,000 trees is a clear demonstration of Nestlé’s continuing commitment to the country and one of its key initiatives in 2012 to commemorate the Company’s 100th year anniversary in Malaysia. As a symbolic gesture to celebrate the achievement in Kinabatangan, Nestlé Malaysia will be contributing 100 forest fruit trees, which will be planted at two of FRIM’s fields in Kepong that are in dire need of enrichment planting Nestlé Project RiLeaf is a riparian reforestation initiative that aims to help sustain one of the world’s richest ecosystems by creating a landscape where nature, people and agriculture (oil palm) can co-exist harmoniously in their need for water. The three-year initiative was launched in 2011 and leverages on Nestlé’s commercial agriculture experience and expertise to speed up the riparian reforestation of 2,400 has of land along the lower Kinabatangan River.