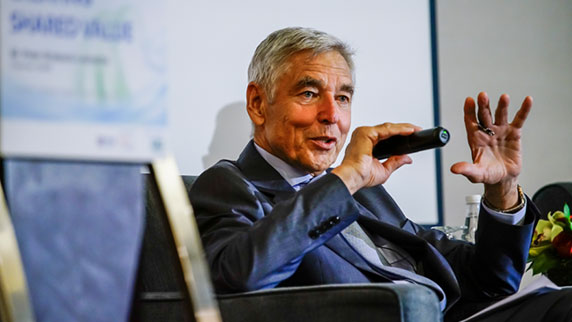 Nestlé’s concept of Creating Shared Value (CSV) is derived from the concept of Corporate Social Responsibility but with a difference. We believe that for a business to prosper in the long term, it not only needs to create value for its shareholders, but also for society in which we operate in.

Recently, Chairman of the Nestlé Group and strong advocate of CSV, Peter Brabeck-Letmathe was invited by the National University of Singapore (NUS) to present a talk about how CSV was conceptualised. The talk was attended by key guests from the private sector as well as the students of NUS.

During the session, he spoke about how Nestlé had already begun practising the concept of CSV long before the term was formally devised. He reached out to Michael E. Porter and Mark R. Kramer, the experts from Harvard who then helped him devise a solid framework which would allow Nestlé to make a larger social impact. This partnership eventually lead to the conception of the article published in 2011, which would revolutionise the role of businesses in society, titled "Creating Shared Value: Redefining Capitalism and the Role of the Corporation in Society".

Since its inception, the concept of CSV has become a prominent indicator on how well a business is doing, both financially as well as how it addresses issues faced by society. The concept has garnered a strong following the world over and is supported by thousands of companies in over 48 countries.

“I hope that you believe, as I do, that there is no other future for business, than to build business future through the Creating Shared Value lens, and that businesses must think long term and address societal needs in its strategy and its operations,” he said.